I'm listening to updates on the aftermath and we still don't know
how many casualties.

Greed always rears it's ugly head and we're having gas price gouging.
Walmart even gouged on the ice , well that's the way it seems. They have
to answer for it. One man was shot 3 times as he entered a man's business
as he was attempting to loot. He died later.

We still have a curfew and a news lady was stopped around 2:00 AM on
her way to work and was finally cleared.

I have to return to Walmart today for white cornmeal I forgot yesterday.
God willing, Andy and his family will be here for a square meal and to buy
gas locally. They live about 12 miles from town and still in the dark and
so blessed to be safe. (I'm probably  repeating) Andy said they couldn't
see their hand in the dark where they are located.

I have to leave shortly and get back home  to cook. The G-Grands will be
here and I figure Kassey will watch them from a distance.
Gotta get going.....
Posted by GreatGranny at 9:56 AM 10 comments:

I was not happy when Mom told me that we may have
to go into the closet again. She scooped me in my cube
and here we went again hiding from the storm. We got
out briefly for visits to the little rooms and I had to have
a few bites. Before it was all over, I wanted to bite Mom.

I was switched from the cube to the PTU coz I was deter-
mined to escape the next time she opened that door. I did 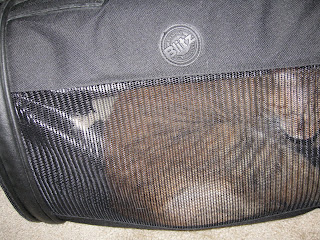 escape and then I was crammed into the PTU.
When we heard hail hitting the roof, Mom said 'it's here'. But it didn't stay long. Mom
was talking to Someone, but she wasn't talking  on the phone at the time. He kept us safe again.

Mom had leaky eyes when she read comments left on her post. We are so grateful for
our blog family and for the purrs and prayers.
Be safe and Blessed.
Posted by GreatGranny at 12:31 PM 17 comments:

We were spared from the awful tornadoes. Kassey sure
was glad to leave the closet. She really tried to be good.
She did growl some when I opened the door a little to watch
through the window. It rained hard and hailed briefly. I was
texting with Kim as the hail beat the roof..( My car seems to
be dent free, thank God.)
Kim said TN son was sleeping for his night shift later. They
were OK at the time and then I heard later it was headed
toward Manchester. I was listening to TV and the scanner.
They were spared but his pickup now has a tree or large
limb on the truck bed, bending the frame. It could have been
so much worse. God was so good to us again as He's been
so often during troublesome times.
They also got flying debris as did his brother who lives about
15 minutes from me.

Andy and his family never had to go into the shelter. However,
it left them in the dark like so many others. They plan to grill the
meat from the freezer. And God willing, I will add a pot of beans.
They can grill veggies as well, sounding yummy already.

Sheila and the D-I-L's and the Grands came by on their way to
Walmart. I'm relieved that the road from here to their home isn't
littered will debri. So I shouldn't have to worry about nails,etc.

Today is the first opportunity to get online since the storms as the
web connect stick has been testy. I called them and of course,
he used the weather for an excuse. I told him that this has hap-
pened before when nothing was going on. I started visiting but
could not comment.

It's dark now and you know who has been hinting for me to close
now. I hope all our friends were kept safe.
Blessings to all.
Posted by GreatGranny at 8:02 PM 9 comments: 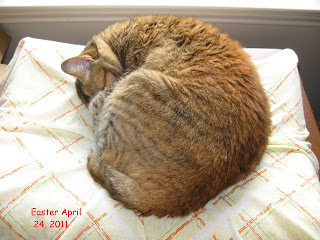 Mom says this is a special day. I just want to wish all our friends and furriends a Happy Easter.
Posted by GreatGranny at 2:41 PM 19 comments: 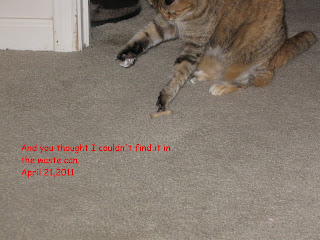 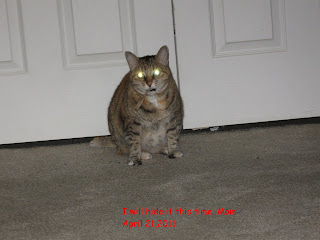 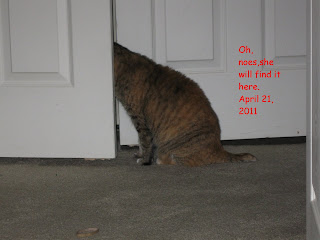 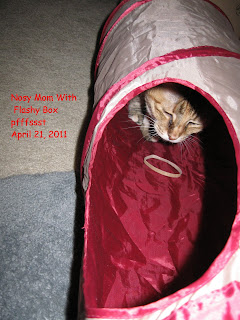 Posted by GreatGranny at 1:40 PM 9 comments: 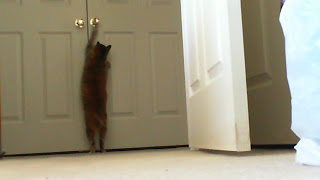 Yesterday Mom opened the windows and the birds
were so happy and singing. I begged to go out coz
I  just knew I'd catch one of those sweet things.

Mom got so busy and as it turned cooler,she closed
windows.. But she forgot her bedroom window. She
was in the kitchen as she smelled an outside visitor.
We never saw the skunk but he left his calling card..

As Mom types, I'm sitting in the bedroom window 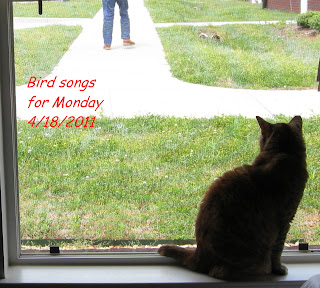 listening to the happy sounds of our feathered friends.
Posted by GreatGranny at 2:15 PM 17 comments:

Nice Monday, so far. I'm visiting between projects. My
closets are shaping up quite nicely and more garbage is
waiting to go to the dumpster.

Kassey is staying out of the way, except when she per-
sistantly wants my undivided attention. And, of course,
I obey. She is waiting patiently for me to clean her room.
It is next on my Monday list.
Be safe, everyone.
Posted by GreatGranny at 12:10 PM 11 comments:

It is a lovely sunny chilly day and not much going
on. I looked in on the boss and she was bathing in
her cube. The sun hasn't moved to her window yet.

See? nothing much. I have got to work some more
around here and make a Walmart trip for hamburger
buns coz I'm not in the baking mood yet.

The weeds are sprouting everywhere. I'm glad I don't
have to do any yard work  I've been toying with the idea
of getting some bell pepper plants and we have to leave
them in the pots. I had peppers before in my hometown.
They did OK but were small.

Andy is improving with diet and medication.And he still
seems to tire easily.
Gotta get busy and as I rest here at the desktop, I'll be
visiting, God willing.
Posted by GreatGranny at 11:13 AM 11 comments: 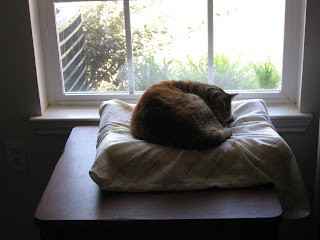 First I'm thankful that I still have a bed to sleep on. I have so  many Blessings that I can't count them all.

Mom locked me out last night acause I was 'misbehaving' again. I was not ready for her to go to bed.
During the late dark time, I knocked on the door and was ignored. I left her alone then and finally got
her up with my knock. It was getting up time and she did. I guess now she'll pay more attention to
my knocks acause my water fountain was making a scary noise. It was too low on water. After the
water was added, it got quite.

I already had breakfast and chewed it good, but up it came. Mom thinks the noisy fountain and her
not getting up when I needed her caused my tummy upset, bad Mom.

It's a sunny , quite Thursday and I'm thankful for the quite sky today. I do hope you all have quite skies
today as well.
Posted by GreatGranny at 9:28 AM 10 comments: 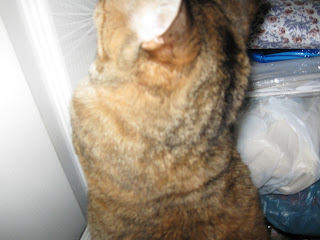 I was really ticked off at Mom as she had her hand on the door knob while leaning against the door. I had enough of that dark little room so I put a bitey on her arm. She didn't see any bloods leaking but she knew I was upset. I was upset too as she scooped me up in my cube and put me in the closet.

My human Brofur, Andy called to see if we were still in the closet. He said, 'Y'all can come out now, The storm has left your area and headed SE.' So as Mom was leaning against the door, she opened it and tumbled out into the floor laughing. I was in the living-room and turned around watching as she put the phone down and got up on all fours  before standing on her hind legs.MOL . 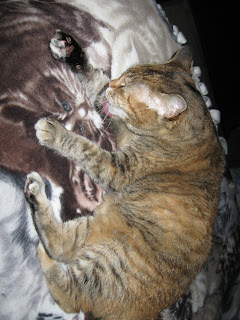 After this ordeal, I headed for my favorite blankie.

Mom here : It almost looks like she's washing a cat on the blanket. We received this as a Christmas gift and it's my favorite one..
When the T-Storm came back she got under the comforter at the head of the bed.
Posted by GreatGranny at 10:52 AM 12 comments:

Messy Monday Inside And Out

The weather is cloudy and dismal today. Schools are closing early
because of tornados expected.. So I'm just waiting for the other shoe
to drop. The closet is ready for me and Kassey. She is resting in her
cube unaware that she may be scooped up and put in the closet.

I'm still shredding and have a mess as Kassey said. She's used to it
by now. I think that as soon as a bill is posted and the money is
extracted from my bank account, I will shred it. I've been afraid in
the past because of certain companies trying to out do or 'whodo'me.

I have divorced the last one who tried this and I have a new credit
card with my credit union. And I already shredded the old one. The
statements will be next, except for the last 3 as I have no trust left for
this business.

I do hope everyone will be safe while these wild storms rage.
Posted by GreatGranny at 11:58 AM 10 comments:

We have been absent for a few days, but we've been
thinking of you friends.
Mom has made such a mess around here, but she's
gonna leave it until she's through emptying organizers.

She is putting papers in this noisy machine that chews
them up and spits them out. There are bits on the carpet
too, and she uses the bags for my poop and pee. I
don't mind that, but the mess ....I just have to be patient
with Mom while she takes her time.

We will try to catch up and see what you all have been
up to. Efurryone have a happy Saturday.
Posted by GreatGranny at 10:10 AM 13 comments: 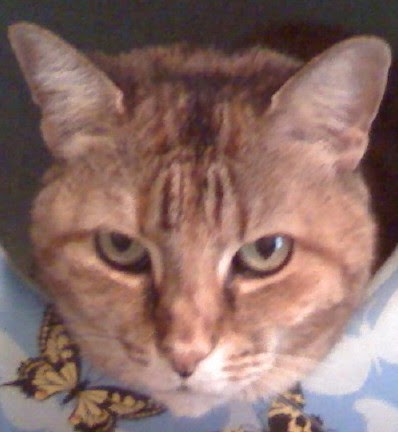 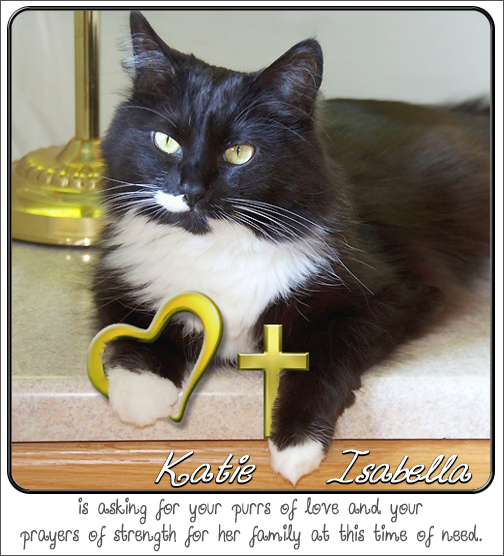 Purrs and Prayers for Flynn